Too many heroes are still forgotten, even on Remembrance Day

Over the years, there have been numerous books and documentaries about the Mackenzie-Papineau Battalion, but at a time when there is such ongoing acknowledgement of Canada’s past historical wrongs, they remain forgotten at Remembrance Day ceremonies, ignored by Veterans’ Affairs. Even the Legion.

It’s been a while since I attended the main Remembrance Day ceremony at Victory Square in downtown Vancouver, opting instead for the quieter, less grand but no less meaningful remembrance at the Japanese Canadian War Memorial from World War One in Stanley Park. Surrounded by trees, their leaves tinged with autumn, there is a sense of peace that appeals to me, along with the reminder of the shameful internment of 23,000 Japanese Canadians during World War Two.

But this year we bypassed both and went to Mountain View Cemetery for two very different commemorations that pinpointed individual veterans in a way large ceremonies cannot. We gathered on the edge of one of the Cemetery’s four Fields of Honour. At 11 a.m. on the 11th day of the 11th month, a small bell tolled 11 times, followed by two minutes of silence. After that, singers from musica intima and the Vancouver Bach Choir, plus some trumpeters and trombonists, fanned out to single graves. At each, they paused, collected their thoughts, read out the soldier’s name, then sang or sounded a short but heartfelt Phrase for Remembrance. Sombre and affecting, it prompted many of us to also wander among the graves, and reflect.

However, there are some former combatants buried at Mountain View whose graves have always gone unnoticed on Remembrance Day. Some lack even a nameplate. They were among the 1,500 brave Canadians who volunteered to fight for the Spanish Republic against Franco’s fascist forces in that country’s bloody civil war. Most were part of the renowned, all-Canadian Mackenzie-Papineau Battalion. More than 400 of them did not return home, a death rate nearly twice that of Canadian soldiers who fought in the horrendous killing fields of World War One. Many more were wounded.

But to this day they remain unrecognized for their sacrifice in the fight against fascism, a fight that Canada, itself, embraced just five months after Franco’s victory, when the country went to war against Nazi Germany. Worse, for many years, they were actually blacklisted, hounded and spied on by the RCMP, labelled “premature anti-fascists” for having the prescience and courage to take up arms against fascists at a time when Canada and other Western democracies refused to take sides in the Spanish Civil War. German and Italy had no such scruples, providing Franco with the arms and war planes that guaranteed his victory.

So, after paying respects to our official veterans, we joined a few others to commemorate Canadian volunteers of the Civil War known to be buried at Mountain View Cemetery. Our group had a large flag of the Spanish Republic, smaller flags and flowers. We were led by Pamela Vivian, whose great uncle Peter Johnson died on the Jarama front, south of Madrid. Her knowledge of the Mac-Paps is deep. With the assistance of helpful Cemetery staff, she was able to obtain a digital map of the gravesites of 16 veterans of the Spanish Civil War laid to rest at Mountain View.

Poignantly, we began at an unmarked grave site, containing the remains of six volunteers. From biographical sketches that have been compiled, we learned they died in poverty, some of chronic alcoholism (possibly PTSD). Like most Mac-Paps, they had a history of hard work and a pre-war involvement in unions, protests and left-wing movements.

…There are some former combatants buried at Mountain View whose graves have always gone unnoticed on Remembrance Day. Some lack even a nameplate. They were among the 1,500 brave Canadians who volunteered to fight for the Spanish Republic against Franco’s fascist forces in that country’s bloody civil war.

Unlike a number of British volunteers who were left-wing intellectuals like George Orwell and Julian Bell, son of Bloomsbury icon Vanessa Bell, they came from the working class, on the bottom rung of the economic ladder, their hope for a better life done in by the Depression.

One of them was Edvin Backman. Like my mother’s family, he came to Canada from Finland, having spent a year in the Finnish cavalry. A miner, a farmer and a lumber worker, he had been knocked flat by the Depression. In common with five other Mac-Paps buried at Mountain View, he took  part in the storied On to Ottawa Trek of the unemployed in 1935 that was crushed by police with riot sticks on Dominion Day in Regina. Backman arrived in Spain on July 24, 1937, was wounded on Feb. 3, 1938 and managed to overcome government resistance to return to Canada early in 1939.

Tom Paterson was there, too. Born in Carlisle, England, his parents so impoverished they were forced, with their kids, into a so-called Poorhouse, he came to Canada in 1929, just in time for the Depression. He found intermittent work as a logger and, of all things, a harness maker, before becoming active with the Relief Camp Workers’ Union. In Spain, he fought with the Mac-Paps in the Ebro offensive, suffering bullet wounds in his right forearm and hip. He died in Vancouver at the age of 55.

Stories of the other Mac-Pap veterans buried anonymously are similar, differing only in detail.

With no identifying markers, we wondered where to place our flags and flowers. “I know there’s someone right here,” one of us said, looking down. That was good enough. We also placed a few mementos beneath a tree, which seemed a more peaceful location than open ground.

With no identifying markers, we wondered where to place our flags and flowers.

We moved to graves that were identified. French-Canadian Joseph Emery Godin, a stonecutter and labourer, went to Spain when he was 37. Frank Rutherford, whose ashes lie buried beside those of his wife Eileen, came to Canada from Scotland with his parents at the age of 14. He worked as a steam engineer and a fireman. He died at 65 of bronchial pneumonia.

At 38, Timothy Christie, a veteran of World War One, was one of the oldest to serve with the Mac-Paps. He was later transferred to the Anglo-American Battery, presumably because of his British nationality, which fought at Extramadura and Toledo. An electrician and construction worker, he was felled by a fatal heart attack at the age of 81.

Two of the Mac-Paps continued their fight against fascism by enlisting in World War Two. (Others were rejected because they fought in Spain.)

Baker, union organizer and another participant in the On to Ottawa Trek, Percy Hilton spent 13 months as a prisoner of war in Spain, before being released and making it back to Canada. He subsequently served with the Canadian Army, dying of heart failure at the age of 72. Because of his “official” veteran status, his grave is now marked by a recent military headstone paid for by Canada’s Last Post fund.

Wounded in Spain during a night action, Thomas Roberts later fought in World War Two with the Canadian Army, but he still has no military headstone. The Last Post Fund has been asked to provide one. Just 35, he died in 1950.

Among the rest, there was a Wobbly, a political commissar, organizers for the Sailors’ Union, miners and a veteran of the Finnish army.

All were solemnly remembered.

Over the years, there have been numerous books and documentaries about the Mac-Paps. Impressive commemorative monuments have been erected in Toronto, Victoria and Ottawa, which lists the names of all those who fought in Spain. But more than 80 years after the end of the Civil War, and eight years after the passing of the last surviving member of the Mackenzie-Papineau Battalion, at a time when there is such ongoing acknowledgement of Canada’s past historical wrongs, they remain forgotten at Remembrance Day ceremonies, ignored by Veterans’ Affairs and the Legion.

Recently, Canada issued an official apology for the World War Two internment of 600 Italian-Canadians, many of whom were suspected of having sympathies for Italy’s fascist leader Benito Mussolini. Yet, those Canadians who travelled across the ocean to actually fight fascism continued to be ostracized and shunned. How can that be?

No less than Governor-General Adrienne Clarkson had it right in 2001, when she spoke at the unveiling of the national monument to the Mac-Paps in Green Island Park in Ottawa. “It is fitting that we recognize now, 65 years later, the historic moment for which these men and women went to fight in a foreign war, a war which was not their own, a war in which Canada was not involved as a nation,’ she told those assembled. She cited the words of volunteer Dr. Norman Bethune: “Comrades who fell in angry loneliness, who died for us, I will remember you.” 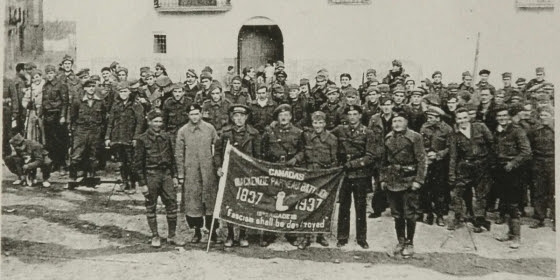 The Mac-Paps. For more information on them visit the Canada History Project: https://www.canadahistoryproject.ca/1930s/1930s-10-mac-paps.html

No Replies to "Too many heroes are still forgotten, even on Remembrance Day"

Ex-Press Yourself... and leave a reply Cancel reply

GIVE US YOUR FEEDBACK